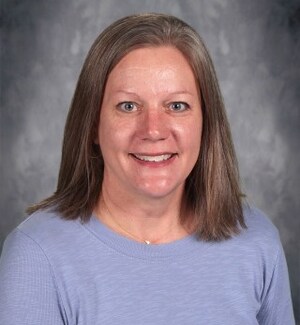 When Faith Block was in high school, she already knew she wanted to help the students who needed it the most. She was a tutor and helped with the Special Olympics. When she became a teacher, she started her career working in special education.

“I always wanted to help students who were struggling,” she says. Today, Mrs. Block is teaching general education classes. But her background helps her there too. “It’s given me more compassion,” she says. “I get what it’s like for students who don’t understand what they’re supposed to be learning.

It's shaped my approach to those who are struggling in a particular area—given me a better idea of when to ease up and when to challenge them.” Mrs. Block began teaching professionally in upstate New York in 1992 before returning to central Illinois the next year, where she taught in Mahomet and at Trinity Lutheran Wee Disciples Preschool in Urbana. She began teaching at St. John in 2004 and has fluctuated between part-time and full-time over the years.

“Since I’ve been at St. John, my role has changed a lot,” she says. “If there’s a need, I try to fill it.” Among those needs: Serving as interim principal for a span in 2017-2019—although she’s quick to credit the faculty for a team effort during that time. Mrs. Block has a Bachelor’s Degree in Special Education from Illinois State University.