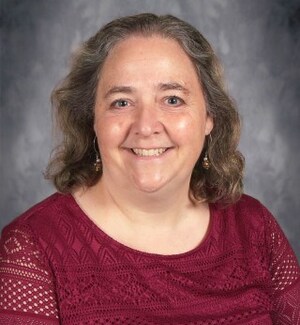 Pam Rudick cherishes many moments in teaching, but one kind stands out above all. “It’s when a student who’s been struggling has a light come on,” she says. “It’s that moment when they finally get it.”

Miss Rudick has been teaching preschool and elementary students since 1993. She served in several towns and cities in Illinois (Forest Park, Steger, Homewood) before joining St. John Lutheran School in 2014.

Among the things she appreciates here are the benefits that combined grades can hold for students. “There’s a camaraderie between the older and younger children,” she says. “If I ask the older, more confident students to help others, they’re more than willing without making fun of anyone. And the younger ones really try to meet the standard the older ones set.”

Before becoming a teacher, Miss Rudick was a sign-language interpreter. She brings that background to work today, posting a sign-language ABC card on the back wall of the classroom. During class breaks, she sometimes invites interested students to learn the sign-language alphabet. It’s a challenge they take to eagerly.

“They want to go beyond their ABCs and they ask me to show them how to sign words,” she says. “At this age, they’re really eager to absorb information.”